On 12 March Ukrainian Helicopters summed up the results of its performance in 2012.

Vladimir Tkachenko, Chairman of the Board – Director General, said that the analysis of the Company's operations in 2012 show the tendency to growth.

'The Company managed to increase its main operational indicators despite the complex situation at the UN market. The number of passengers and the volume of transported goods increased by 18350 people and 1294 tons respectively. Total flight time increased by 2589 hours. The amount of flight hours per employee makes 31,1 hours against 29,6 hours in 2011' – said V. Tkachenko.

The number of Company's staff increased by 9%, from 467 people in 2011 to 513 people in 2012. 'This is a good sign of Company's development', - said Vladimir Tkachenko, - 'Last year Ukrainian Helicopters employed 119 people, with 47 specialists working in one of the key branches, to include 12 aircraft commanders, 10 co-pilots, 10 flight engineers and 8 flight attendants'.

Maintenance department and Commercial departments employed 27 and 9 people respectively. Currently there are 335 specialists with higher education diplomas working in the Company. The number of employees with university degrees increased almost by 9%.

Comparative chart of the Company's hiring policy in 2011 and 2012

ГDirector General emphasized that the Company management pays serious attention to age factor of the employees and does every effort to hire young professionals. At present there are 359 people under 50 working at Ukrainian Helicopters, with major share of the staff aged 45 - 50 and 30 to 40 years old. 'We are focused on employing young people for them to potentially get on job training as well as attracting highly qualified middle-age specialists. Nevertheless, the UH will take only the best professionals and won't keep those who are not complying with the Company's requirements. For instance, in 2012 UH dismissed 36 people with did not meet ours criteria' – said V.Tkachenko.

Comparative chart of the staff dismissal in 2011 and 2012

In 2012 experienced Company trainers in cooperation with the Kremenhcug Flight College of the National Aviation University also provided training service to the pilots of other countries.

Training under the CAA of Ukraine programs 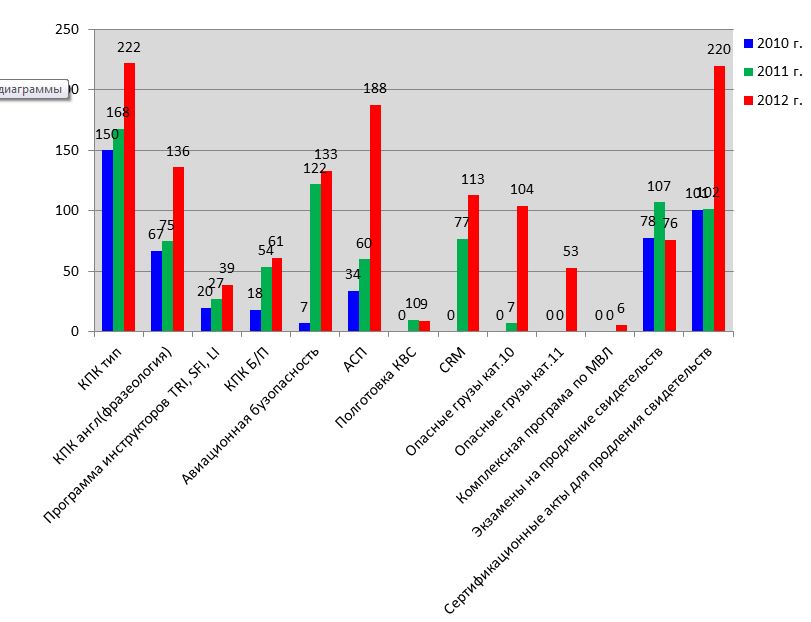 The training was also held under in-house Aviation Training Centre programs for 767 people in 145 groups (in 2011 there were 429 people in 75 groups).

Training under the in-house Company programs 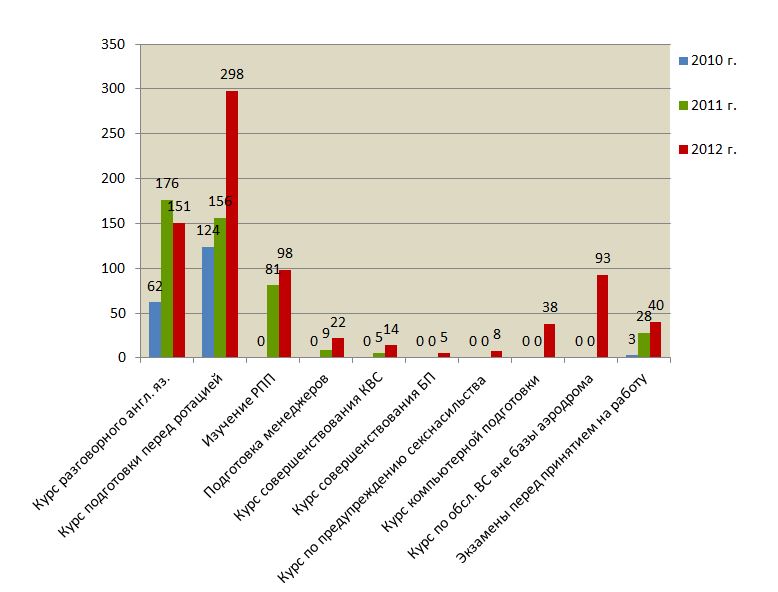 First Deputy Director General Gregory Krivoshyja analyzed the flight safety level in 2012 and in the first quarter of 2013.

At the same time, first Deputy Director General stressed that the system of mandatory and voluntary reporting, currently being implemented in the Company, remains one of the issues. 'Unfortunately, the crew members working in the UN missions have not been pro-active yet, but we are working on it' - said G.Krivoshuja.

At the end of 2012 the position of a Company senior doctor was established to organize the work of Flight Department doctors and provide for the healthcare of the Head office staff. Additionally, the check-up of the personnel working in operational points in Africa has also been provided for.
"These steps are aimed at safeguarding on-going monitoring and providing medical assistance to our employees in the countries of the Company's operation in Sudan, South Sudan, the DRC and Côte d'Ivoire. Prior to their business trips all employees are well informed and receive the necessary recommendations to prevent diseases while being stationed in Africa '- said a senior doctor Aleksander Bandura.
The Company initiated post- business trip medical examination in addition to the mandatory medical check-up before the departure on the UN missions. "These steps and preventive measures mean additional costs for the Company, but they are well justified, since they enable us to take better care of our employees,' - assured Bandura.

In conclusion, the Company's main goals for 2013 have been set, with the main focus bringing Company's performance in line with the international standards, maintaining high quality of work and enhancing flight safety.